22:14
Unknown
Diamonds may be forever, but they aren’t what they were. True, they shine just as brightly and they’re as hard as ever, but scientists from the Carnegie Institution of Washington are giving them some competition. An international team led by Carnegie’s Lin Wang has discovered a new substance that is not quite crystalline and not quite non-crystalline, yet is hard enough to dent diamonds.

Simulated structure of buckyballs and new super-hard material
The new substance, which has yet to be named, is described by Wendy Mao, a Stanford University professor, as a “hybridization of crystalline and amorphous structures at an atomic level.” It was also something of a surprise to the Carnegie team.
The super-hard material started out as clusters of carbon-60 – the soccer-ball shaped molecules of carbon commonly known as "“buckyballs." These were mixed with m-xylene solvent, which is used in the manufacture of soft drink bottles. The mixture was then placed in a diamond cell anvil at the Argonne National Laboratory's Advanced Photon Source in Argonne, Illinois. 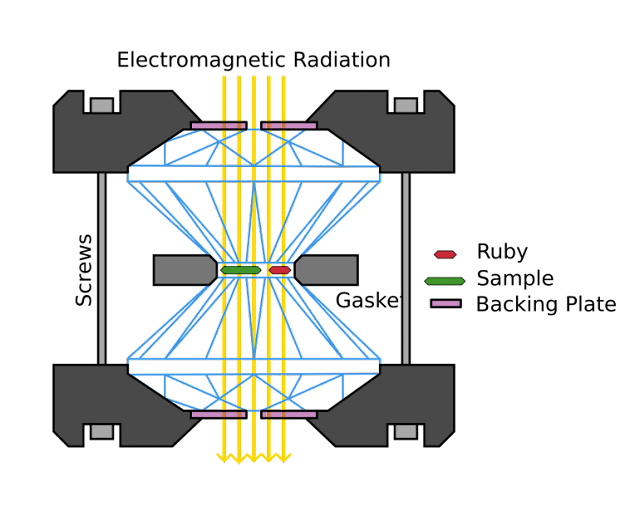 The diamond cell anvil was key to the experiment. This is a super high-pressure chamber made of two flat-faced diamonds. The buckyball/solvent mixture is placed in a cell between the diamonds and pressure is applied. As the diamonds squeeze together, the mixture is subjected to a pressure of, in this case, 600,000 atmospheres. Not surprisingly, the buckyballs were crushed. What was mildly surprising was that properties of the former buckyballs were altered until they became hard enough to dent the diamonds. That is not unprecedented, but what was very surprising was that the new substance retained its structure once the incredible pressure was removed. What was even more surprising was that it turned out to be a substance that no one had seen before.
All solid matter comes in one of two forms. Either it has an ordered, crystalline structure, like quartz or iron or diamonds, or it is non-crystalline or amorphous, like glass or gels. What this new substance has is both. If you apply massive pressure to buckyballs, you should get mashed buckyballs, but the m-xylene reacted with the carbon in some manner so that it retained a long-range, regular molecular structure. In other words, it retained the order of a crystal despite its crystalline structure being destroyed.
According to Wang, there is more here than a laboratory curiosity. “We created a new type of carbon material, one that is comparable to diamond in its inability to be compressed,” Wang said. “Once created under extreme pressures, this material can exist at normal conditions, meaning it could be used for a wide array of practical applications.”
Exactly what these applications are remain unknown, though it could be as a protective coating or find mechanical, electronic, and electrochemical uses.
Sources: Carnegie Institution for Science Stanford University
Labels: Science and Health
Share This To :
Newer Post Older Post